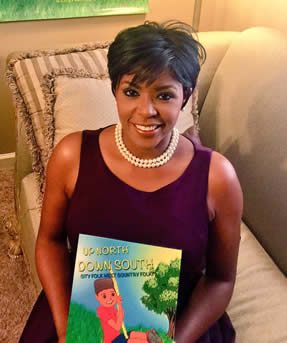 New Children's Book Addresses Similarities and Minor Differences That Still Exists Among Southerners and Northerners In A Colorful and Kid Friendly Way!

"Up North, Down South", is a new children's book by Television Anchor Katina Rankin  that addresses still-too-common misconceptions about the south.

"Up North, Down South: City Folk Meet Country Folk", is a book that shows young people it doesn't matter your geographical area, we are more alike albeit southern or northern.

9-year-old McKennley and his 7-year-old sister Kendall are growing up in New York City. They are about to go on a summer vacation to Mississippi where they've heard several rumors about the rural state.

Rumors like "Folks from the south talk funny. They say y'all and wave at everybody they pass on the street. They don't have regular pets like cats and dogs. They only have cows, goats and chickens. And, sometimes they act like cavemen."

But, once the children spend some time in the country they soon realize there are very few differences between city folk and country folk.

"This book takes children on a journey across Mississippi, while addressing still-too-common misconceptions about the state in an age-appropriate manner. This book entertains the reader while showing that Mississippi is a wonderful state with wonderful people. I believe this book will instill pride in Mississippi’s children, as well as help the children outside of our state gain an appreciation for Mississippi." – Marcus L. Thompson, Chief Administrative Officer at the Mississippi Institutions of Higher Learning

"Up North, Down South" is a chapter book for children Pre-K through 5th grade with global themes and relevance.

"Up North, Down South" is available online at amazon.com:

About The Author: Katina Rankin is an Emmy-nominated television news anchor.

Rankin is the recipient of the Martin Luther King, Jr. Community Service Award, the Athletes for Progress Award and has been honored by many other prestigious organizations. Rankin has also been named Mississippi Woman of the Year.