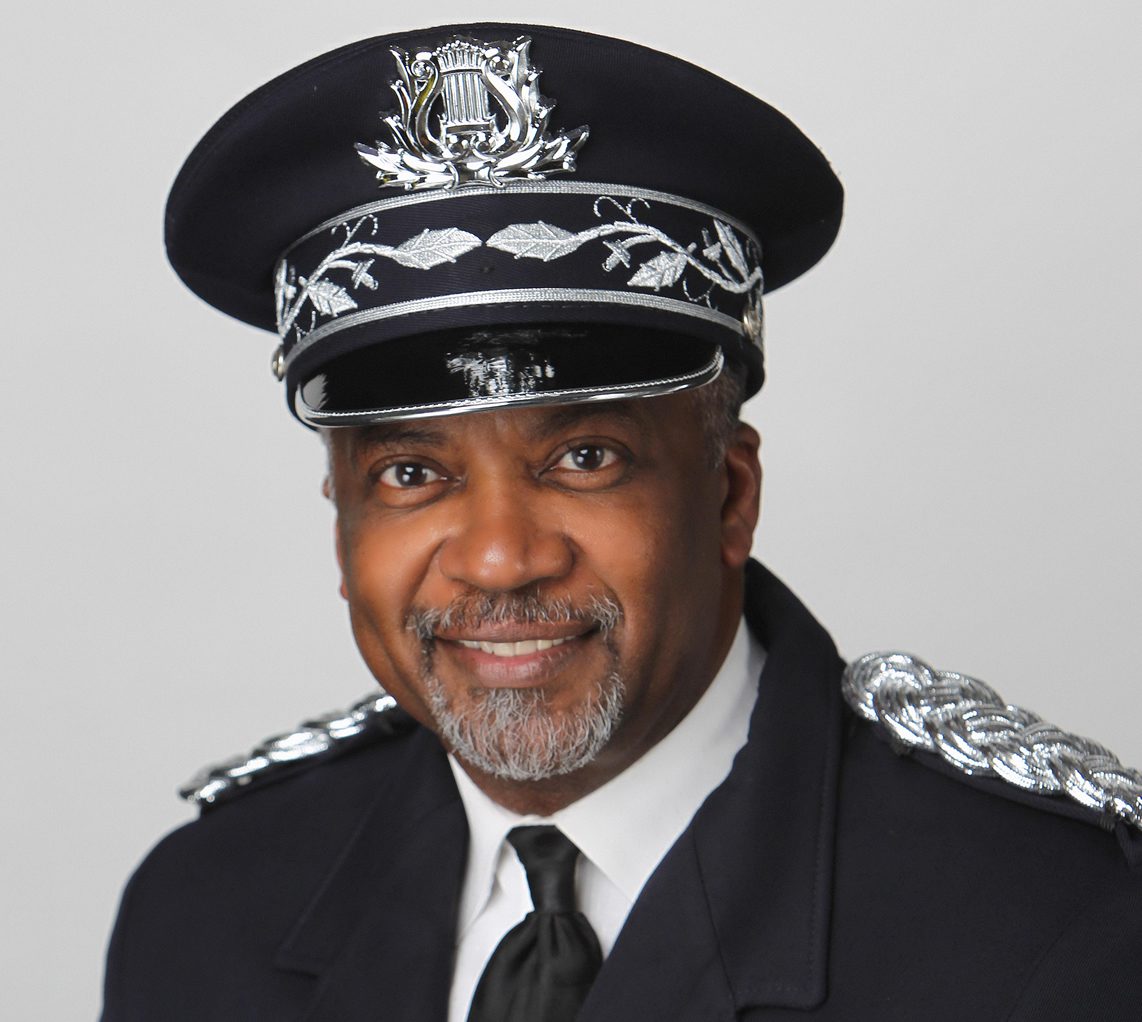 Mr. Dowell Taylor, a native of Jackson, Mississippi, is a graduate of Callaway High School. He also attended Jackson State University receiving the B.M.E. and M.M.E. degrees, respectively. Mr. Taylor participated in the JSU “Sonic Boom of the South” Marching Band Tuba Section, and during his undergraduate years he arranged more than 100 band selections including the current JSU theme song, “Get Ready”, originally arranged by John Paul Jones.  In 1975 he received the highest award a JSU bandsman could receive, the “Best All Around Bandsman” award. Mr. Taylor did further study (90 quarter hours) while enrolled in the Doctor of Musical Arts program in Wind Conducting at the University of Cincinnati, College Conservatory of Music, Cincinnati, Ohio.

After graduating from JSU, Mr. Taylor served as Director of Bands at Mary Holmes, Jr. College, West Point Mississippi, Kentucky State University, Frankfort, Kentucky (where he also served as Department Chair), and from 1984-1992, as Director of Bands and Director of Music Technology at Jackson State University conducting both the Symphonic and Marching Bands. During this period, the famous JSU “Sonic Boom of the South” Marching Band received numerous awards and citations including national coverage in Jet Magazine, the Christian Science Monitor, and People Magazine. The Band was also featured as “Special Guest Band of Honor” at the St Petersburg, Florida Martin Luther King Battle of Bands, the 1991 NBA All-star basketball game, Charlotte, North Carolina and Motown’s 30th Anniversary Celebration in Hollywood, California, 1990. One of Mr. Taylor's most notable performances with the JSU Symphonic Band was in 1987, featuring Dr. Karen Laubengayer, pianist and Professor of Music at JSU, performing George Gershwin's "Rhapsody in Blue" adapted for band by Mr. Taylor.

Mr. Taylor received the JSU outstanding Alumnus award in 1992. In 1998, 2000, and 2003, the Jackson Music Awards, incorporated, named him the “Local Musician of the Year”. In 2016, Mr. Taylor’s Jazz group, The Dowell Taylor Jazz Quartet, received the Jazz Group of the Year Award from the Jackson Music Awards, Incorporated. In 2008, The Dowell Taylor “Big Band”, a 40 piece jazz ensemble, performed for the annual Blair E. Batson Hospital for Children's New Year’s Eve Fundraiser Gala at the Hilton Hotel in Jackson, Mississippi. On December 10, 2010, the Mississippi Jazz Foundation honored Mr. Taylor for his contributions to the field of music education and the Jazz music genre. In 2015, the Mississippi Humanities Council honored Mr. Taylor with a Humanities Teacher Award as a distinguished professor at Jackson State University.

On April 1, 2012, after a twenty-year hiatus from the band field, Mr. Taylor accepted the appointment to the position of Interim Director of Bands, Assistant Professor of Music and Director of Music Technology at Jackson State University. In December 2012 the position was made permanent. During this second stint as Director of Bands, the “Sonic Boom” was featured in numerous media outlets including a two-page coverage of the band’s pre-season camp in ESPN the Magazine, a CNN special on the Morning Show Featuring Robin Meade, twice at the Honda Battle of the Bands Showcase of eight of the top bands in the nation, The American Journey, a CNN production chronicling the journey of what it takes to become a member of the famed “J5” Drum Majors, and performed for the New Orleans Saints nationally televised football game. Mr. Taylor has served as adjudicator and clinician throughout the United States, as well as guest conductor for the HBCU National Consortium for Band Director’s Conference, Atlanta Georgia, the Miami, Florida Music Festival, the MEAC Music Conference in Elizabeth City, North Carolina, the Atlanta, Georgia Music Festival, the Memphis Tennessee Honors Band and the Jackson Public Schools All-City High School Music Festival.

Mr. Taylor has received certification in Music Technology from the Technology Institute for Music Educators (TIME) in Pasadena, California, served as a grant evaluator for the Department of Education, Washington D.C., Music Director for the Mississippi Diversity and Majesty Awards Ceremony, Computer Literacy Instructor for a federally funded “Prevention Intervention” After-School Program, a Web Designer, and Minister of Music/Organist at the Greater Mount Calvary Baptist Church, Jackson, Mississippi. Mr. Taylor has been featured as guest conductor with the Mississippi Symphony Orchestra presenting Richard Smallwood’s “Total Praise” and regularly performs on keyboard with his Jazz Trio and Quartet. He has also performed at the National Black Caucus Reception in Washington, D.C., and his Gospel Choir has performed for the Governor Ray Mabus' Inauguration Ceremony, Jackson, Mississippi. In 2009, he developed an undergraduate degree program in Music Technology at Jackson State, which received accreditation from the National Association of Schools of Music (NASM).

Mr. Taylor has presented at national conferences including the Society for Information Technology and Teacher Education (SITE), Orlando, Florida, “Turning Teachers On To Technology for the Twenty-First Century” and the National Black Music Caucus, Pittsburg, Pennsylvania, “Black College Bands, Where Do We Go From Here?”  On January 8, 2012, he presented the topic, "Issues Involving the Integration of Technology into the Music Curriculum" at the International Conference on Education, Honolulu, Hawaii.  In April of 2015, Mr. Taylor served on a “Hazing in HBCU Marching Bands” discussion panel at the HBCU National Band Director’s Consortium in Atlanta, Georgia.

On June 30, 2015, Mr. Dowell Taylor retired from Jackson State University after 31 years of service. Post retirement, Mr. Taylor has been honored by the nationally acclaimed Honda Battle of the Bands in Atlanta, Georgia, the Jackson, Mississippi City Council, the Sonic Boom National Alumni Association, and Mr. Andre Delano, a national recording artist who has performed with, Baby Face, Lionel Richie, Maxwell, Johnny Taylor, Dorothy Moore, and Stevie Wonder. On April 15, 2016, Mr. Taylor was honored by the HBCU National Band Director’s Consortium, for his many years of service to Jackson State and the “Sonic Boom of the South Marching Band.” The National Conference was held in Atlanta, Georgia on April 13-16, 2016.

On September 18, 2017, Mr. Taylor, out of a profound, deep and abiding love for his alma mater, accepted the appointment of the position of Interim Director of Bands, Assistant Professor of Music and Director of Music Technology at Jackson State University. He is anxious to assist with preparing the Jackson State University “Sonic Boom of the South” for its next generation of spectacular leadership.

Mr. Taylor is married to Dr. Vivian Taylor, and they have one son, David, a Patent and Trademark attorney with the Department of Commerce, Washington, D.C.