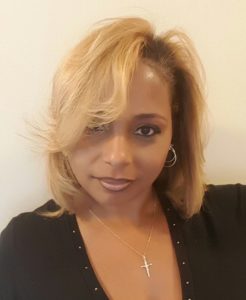 A graduate of Jackson State University with a BA in Finance is an auto-broker and a successful business owner from Chicago, IL. She is the co-owner of Harold's Chicken N Ice Bar located in Atlanta and Marietta, GA. She will be opening another location soon in Jackson, Mississippi. She is the epitome of hard work; determination and characteristics pushed her to work two jobs in order to complete her college education. The exact same qualities that keep her going today.

The road to success has not been a walk in the park. After graduating from college she went on to work for Wells Fargo Finance Department in Jackson, Mississippi and a waitress by night. She excelled at her job but Mississippi was not enough for this big city gal. She would step out on faith and move back to her hometown Chicago without a job to meet her.

It was there that she learned the essence of entrepreneurship and running your own business as a mortgage broker. The job was commission based and forced her to work extremely hard for her money. Two years later she was so successful she was able to open her own business and employ staff. The real estate market crashed and like many others, her business suffered.

Bobbie believes in “The Back-Up Plan” she utilized the skills she learned as a mortgage broker and refocused. The road of entrepreneurship leads her to invest in Chicago based franchise Harold’s Chicken Shack. She and an associate put their money together and Harold’s Chicken and Ice Bar was born in Atlanta, Georgia. Due to builder issues the restaurant took three years to complete. The delays and hiccups didn’t sway Bobbie, she pushed through with hard work and determination and the Atlanta's Edgewood location opened its doors in 2012. Because of it’s success she was able to duplicate her extraordinary style to the franchise, in September 2017 the Marietta location opened.

Bobbie is successful because of her passion for people. She believes in being a service to others in order to make a difference in their lives. Her ultimate goal is to expand her empire by opening other businesses. She lives by the motto “I can.” And she can, because she is. Bobbie Robinson is just getting started.