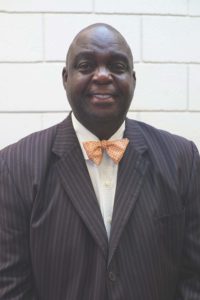 Eric D. Stringfellow is a 1982 graduate of Jackson State University and has been tasked with building another Department of Mass Communications, this time in The Lone Star State.

Before coming to Jarvis, Stringfellow served as an independent program and media consultant. His clients included Jackson Public Schools, the Institute of Government at Jackson State University and the Mississippi Roadmap to Health Equity. Previously, Stringfellow served as executive director of University Communications at JSU and Interim Chair of JSU’s Department of Mass Communications.

Stringfellow also had a distinguished career as a journalist, and wrote an award-winning column for Mississippi’s largest newspaper.

After returning to The Clarion-Ledger he served as night editor, political editor, and public editor was a member of the newspaper’s Editorial Board, and started his column. He also served Jackson State University as an adjunct professor and professional-in-residence. In addition, he served as an adjunct professor at the University of Mississippi.

Stringfellow is past president of the Jackson Association of Black Journalists, the 100 Black Men of Jackson and is a former board member for Mission Mississippi, the Margaret Walker Alexander Research Center, Baby Steps and the Tiger Fund. He is a member of the Margaret Walker Alexander Research Center and a board member of JSU Sports Hall of Fame.

He is a life member of the JSU National Alumni Association, Inc.