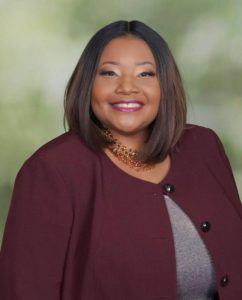 Jackson State University alumna, Dr. Yolanda J. Butler, has mentored women in public service and helped emerging leaders navigate through the peaks, obstacles and successes of the civilian workplace since the early years of her professional career.  Some could even say Butler’s commitment as her sister’s keeper dates to her beloved alma mater when she tutored her classmates and served as an editor of The Blue and White Flash, or as a young high schooler in Clarksdale, MS tutoring younger students after school at St. George’s Episcopal Church. Her grounding in public service is strong in family Jacksonian legacy, rich with educators and local leaders, and being of service to humankind.

Over the last 24 years, Butler has worked at the Administration for Children and Families, U.S. Department of Health and Human Services (ACF/HHS).  In the last decade, as a skilled and knowledgeable public administrator, Butler provided leadership in social services and economic development programs via various initiatives.  She has served a senior advisor in the Office of Legislative Affairs and Budget; worked on detail in the Office of U.S. Senator Carol Moseley-Braun as a Presidential Management Fellow; served as Acting Director for some three years in the Office of Community Services; worked some 13 years as Deputy Director for the Office of Community Services; and served as Director of the Division of Social Services.

Across her roles, Butler has guided some $7 billion in community services and developmental disabilities policy. Some accomplishments follow:

* Represented the United States at the Organization of American States’ (OAS) conference on social services, which also featured the Assets for Independence, a program in her office, in Cali, Colombia.

* Instrumental to the development and establishment of an interagency collaboration to bring fresh food vendors to dis-invested urban and rural areas (called “food deserts” by the USDA). This effort necessitated a partnership with USDA, Treasury and HHS, with HHS/OCS’ role to provide base funding of up $800,000 grocery stores, farmers’ markets, and similar vendors, employing individuals with low-income for jobs created in the served community.

Butler entered public service first as an intern at the US Department of State in Washington, D.C., while in graduate school at Howard University in Washington, D.C. in 1995. She followed her internship and academic success as Howard University’s single 1996 nominee to the federal government’s prestigious post-graduate program, the Presidential Management Fellowship (PMF). After selection for one of only 120 PMF positions in 1996, Butler began her journey in earnest at the US Department of Health and Human Services, where she has served nearly 24 years, helping urban and rural communities, children and families around the United States.

Butler’s experience spans service as Director, Deputy Director and Senior Advisor of varying federal offices. She has a certificate in Executive Leadership from American University, and has twice received an agency Exemplary Leadership award and was honored to represent the US at a conference for the Organization of American States on social development in South America. Butler also received an agency award for her Outstanding Volunteer Service in Mentoring in 2012.

After too many conversations with women of color who felt isolated in the federal workplace, Butler decided it was imperative to use her talents as a mentor and acumen as a leader to found in 2019 an organization that provided a forum for Black women and allies called B-WISE, LLC or Black Women who Inspire, Lead and Excel.  Her organization’s motto is, “We are our Sister’s keeper!”  The organization hosts roundtable discussions, pairs mentors and coaches with emerging leaders, and hosts retreats. (BWInspire.com)

​Butler has a Ph.D. in Political Science from Howard University (2006) with a focus in Public Administration and American Government.  She also has a 1994 undergraduate degree in Communication (minor in Political Science) from Jackson State University, W.E.B. DuBois Honors College. She recently celebrated 27 years in the sisterhood of Delta Sigma Theta Sorority, Inc., having been inducted at JSU’s Delta Pi.

Butler works hard for Jackson State University, as well. She served for four years as the president of the Greater Washington, DC Chapter of the JSU National Alumni Association (JSUNAA), two terms as both a JSUNAA board member and vice president of the Northeast Region.

Butler resides in metro-Washington, D.C., with her family. In her spare time, she paints and writes a blog on being a woman of color in public service, self-care, coaching and mentoring. One of her favorite quotes is Dr. Martin Luther King’s, “Life’s