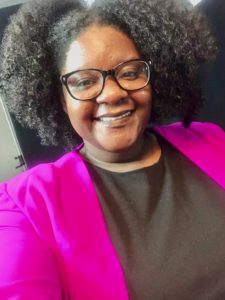 Brittany N. Gibson is a proud native of Vicksburg, Miss., and currently resides in Cordova, Tenn. She hails from a long-standing legacy of JSU Tiger graduates including her mother, aunt, two cousins and younger sister. Brittany received a Bachelor of Science in Chemistry from Jackson State University in 2013.

Gipson is employed as a laboratory technician/soil analyst at Floratine Products Group in Collierville, Tenn., where her responsibilities include analyzing soil cores in the sports industry both nationally and internationally, facilitating in soil research, column studies, lab quality control, and product formulation.

During Gipson’s matriculation at Jackson State, she was actively involved in campus life including the American Chemical Society, NAACP-JSU Chapter, W.E.B. DuBois Honors College, Lois Stokes Mississippi Alliance Minority Program and was a spring 2012 initiate into Zeta Phi Beta Sorority, Inc. – Lambda Beta Chapter. Gipson’s love for music and showmanship pushed her to achieve a childhood dream – to be a member of the famous “Sonic Boom of the South” and participate in the “Tiger Run On”. She also participated in the Jazz II Ensemble and Concert Band.