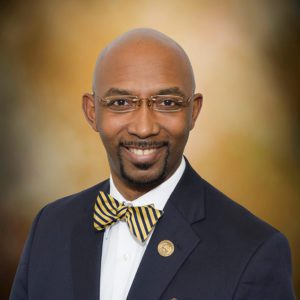 Dr. Josiah J. Sampson, III was named Provost and Vice President for Academic Affairs at St. Augustine’s University and is a native of Jackson, Mississippi. His father was an orchestra director and music professor at Jackson State University and his mother is a retired teaching supervisor from the Mississippi School for the Deaf.

In 1997, Dr. Sampson obtained a bachelor’s degree in biology with a minor in chemistry from Jackson State University. While there he was active in the marching band, woodwind ensemble, symphonic band, NAACP, Alpha Phi Omega National Service Fraternity, Biology Club, and the Allied Health Professionals Club. Additionally, he was a dean’s list scholar, tutor and mentor for other students.

Prior to moving to Nashville, Tennessee in 1998, Dr. Sampson began a teaching career by assisting in teaching laboratory techniques to medical technology students in the Mississippi Baptist Medical Center’s Medical Technologist program. He served as a biology instructor of both James B. Murrah and Robert M. Callaway High Schools. While teaching and revising science department standards at Callaway, he also served as Assistant Band Director for both marching and concert bands. Upon moving to Nashville, Dr. Sampson began teaching at Murphy Alternative School responsible for all required high school science and math disciplines, developing the science curriculum, serving as principle-designee, public relations correspondent, and developing the school’s computer lab.

In 1999, Dr. Sampson began teaching multiple sciences at Hunters Lane Comprehensive High School and was responsible for upgrading the school’s science department to meet OSHA standards. Additionally, Dr. Sampson wrote the chemistry curriculum for the school’s International Baccalaureate program and he worked on the Mission and Beliefs committee for the school’s SACS accreditation. He also sponsored extracurricular clubs for students and was repeatedly commended for tutoring and mentoring students before and after school hours. Dr. Sampson completed his Masters of Education in Administration and Supervision in May 2002 at Tennessee State University and was inducted into Phi Delta Kappa Honor Society.

Beginning matriculation at Meharry Medical College in 2002, Dr. Sampson worked toward his doctoral goals while serving as a microbiology teaching assistant, biochemistry tutor, Meharry-Vanderbilt Alliance representative, and Graduate School Association president and parliamentarian. He received the Dr. Larry Herring award twice and the Frank Royal award during his matriculation. Dr. Sampson also received the Martin Luther King, Jr. award from Meharry Medical College and was a co-winner in receiving the Interdenominational Ministers Fellowship Award of Nashville. Additionally, Dr. Sampson received the George Howard Memorial Scholarship and a scholarship from the General Board of Higher Education and Ministry of the United Methodist Church.

August of 2007 saw Dr. Sampson start as a lecturer culminating at associate professor of biological sciences at Elizabeth City State University. He worked on and chaired multiple university committees including UNC Campus Security Initiative, SACS and NCATE/CAEP. Some of Dr. Sampson’s other university duties were chair of the Joint Council (disciplinary appeals) and Academic Appeals and Re-entry Committees and member and/or Chair of the General Studies Advisory Board, Department and University Retention, School Handbook, Teacher Education Advisory Council, Faculty Hearing, and School Retention Committees. Dr. Sampson was also an assistant band director and advisor of several student groups at the university.

In 2018, he accepted the invitation to serve as Dean of the School of Arts and Sciences at Stillman College in Tuscaloosa, Alabama. There he was also the LSAMP and Harte Honors College Director, and co-advisor to several student organizations. Dr. Sampson has held memberships in several professional organizations.

In the community, Dr. Sampson has served as a scoutmaster of a Boy Scouts of America troop, member of the Board of Trustees and taught the couple’s ministry at Clark Memorial United Methodist Church in Nashville, TN, and several capacities, including Master of a Masonic lodge. Dr. Sampson has also been chapter president and worked on numerous committees with the Omega Psi Phi Fraternity, Inc., and as a Deacon and Vice-Chair of the Diaconate Ministry at Corner- stone Missionary Baptist Church in Elizabeth City, NC.

Dr. Sampson is married to Daphny M. Sampson and they are proud parents of six combined children. He enjoys sociology, philosophy, listening to music, Black literature, poetry, and history.