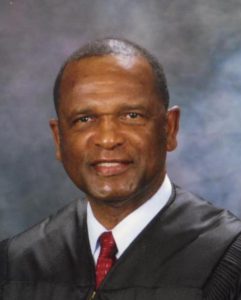 While engaging in the private practice of law, Judge Irving also was active in Democratic politics, serving in responsible positions and working hard to elect real democrats. He was primarily responsible for putting together the 2nd Congressional District Preferential Caucus that selected then supervisor Bennie Thompson as the choice of Democrats to run in the special election to fill the congressional seat vacated by Mike Espy when Espy resigned to become President Clinton’s Secretary of Agriculture. From mid 1992 to 1998, Judge Irving served as chairman of the Leflore County Democratic Executive Committee. In 1996, Judge Irving was elected to both the Mississippi Democratic Executive Committee and one of Mississippi’s four representatives to the Democratic National Committee. He served in those positions until he qualified to run for the Court of Appeals of the State of Mississippi. As a candidate and as a judge, he was prohibited by state law from participating in partisan politics; therefore, he had to resign his positions with the Mississippi Democratic Party.

Prior to being elected to the Court of Appeals in 1998, Judge Irving spent approximately twenty years in private practice. He practiced law in Greenville, Mississippi, with two college friends for approximately ten years before returning home to Greenwood, where he enjoyed a solo practice for ten years before being elected to the bench. During his years as a private attorney, Judge Irving had a diverse practice which included representation of both civil and criminal clients and a number of public clients, including the Housing Authority of the City of Greenwood; the cities of Itta Bena and Shaw; the towns of Jonestown, Sledge, and Winstonville; and the Shaw, Mound Bayou, and Leflore County school districts. He also handled a number of impactful cases, including the successful defense of Hershal Wilburn’s challenge to the election of Peggy Hopson Calhoun to the Board of Supervisors of Hinds County, which resulted in Hinds County attaining a majority African American board for the first time; and the defense of Orlando Fratesi’s challenge to the election of Carl Palmer to the Greenwood City Council. Although a new election was ordered, Judge Irving’s role in ensuring that African American voters were not disenfranchised during the new election ultimately  resulted in Greenwood also having a majority African American council for the
first time.

Judge Irving served as a presiding judge on the Court of Appeals from March of 2011 until his retirement in December 2018. During his tenure on the Court, he was instrumental in expanding the Court’s Court-on-the-Road Program to include annual oral arguments at Alcorn State University, Mississippi Valley State University, and Rust College. Judge Irving is a past president and treasurer of the Magnolia Bar Association. He is a member of the bar of the Supreme Court of the United States of America, the American Bar Association, the Mississippi Bar, and the Magnolia Bar Association. He is also a life member of Alpha Phi Alpha Fraternity, Inc., a former member of the American Trial Lawyers Association and the Council of School Board Attorneys. Additionally, Judge Irving is a life member of the Jackson State University National Alumni Association and has established and funded an endowed scholarship at his beloved “Thee I Love.” He is a Methodist and a member of Wesley United Methodist Church in Greenwood. Judge Irving is married to the former Ethola Garrett Collins, and they have a blended family  consisting of six children, ten grandchildren, and one great grandchild. Read More