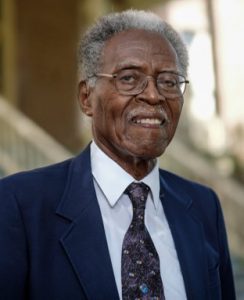 Dr. John A. Peoples, Jr., the sixth President of the institution, was the founder of the Army Reserve Officer Training Corp (ROTC) unit at Jackson State University.

Dr. John A. Peoples, Jr., is a native of Starkville, Mississippi, where he attended elementary and secondary schools.  After graduating from high school, he was drafted into the United States Marine Corps and was Honor Man in his recruit training platoon and sharpshooter rifleman. He was number one in his noncommissioned officers class and spent 2 ½ years in the United States Marine Corps attaining the rank of Sergeant. He served as a Drill Instructor at Montfort Point, the recruit training camp for Black marines at Camp Lejeune, North Carolina, during World War II. He also attended Radio Technicians class at the Tracked Vehicle Battalion, Camp Pendleton, California, where he subsequently served as a radio technician.

In July 2012, Dr. Peoples was awarded the Congressional Gold Medal, as one of the African–American Marines of World War II who were trained at the racially segregated Montford Point Camp of Camp Lejeune, North Carolina.

After discharge from the Marine Corps, Dr. Peoples entered Jackson State University in September 1947 where he earned the Bachelor’s Degree in Mathematics. While attending Jackson State University, he was on the varsity football and track teams and was elected president of the Student Government Association for two consecutive years. After graduating number one in his class in 1950, he attended the University of Chicago, where he earned the Master of Arts and Doctor of Philosophy Degrees.

Dr. Peoples served as President of Jackson State University from 1967 to 1984. During his 17-year tenure as President, the University experienced dramatic growth in enrollment, program, and physical plant that was unparalleled by any period in its history. The student enrollment grew from 2,200 to 7,800. The academic program developed from the baccalaureate level in essentially teacher education to a five – school professional program up to the doctoral level. Accreditation grew from the general regional accrediting associations, Southern Association of Colleges and Schools (SACS), to nine national departmental accreditations. The physical plant of the University increased five-fold in classroom space, administrative space, and land.

The administration of Dr. Peoples included the dramatic years of the Black Student Revolution in which African–American college students in both white and black colleges were in the vanguard of the civil rights movement. During this period, Jackson State University experienced four consecutive years of student upheavals. The most tragic year was 1970 when on May 14th, city and state law officers fired on students in a Women’s dormitory killing two students and wounding 22.

In 1974, the landmark Ayers v Waller desegregation suit was filed in Mississippi. As president of Jackson State University, Dr. Peoples played a strategic role in support of the plaintiff’s efforts against the State College Board to eliminate the dual system of higher education. In his book, To Survive and Thrive, Dr. Peoples poignantly treats these two critical periods of his administration.

Dr. Peoples has been active in the academic world, serving on the boards and commissions of virtually all of the major national and southern regional associations. He was one of the pioneers in the establishment of the National Association for Equal Opportunity (NAFEO) in the early seventies and was the first African–American to serve as Chairman of the Board of the American Council on Education.

He serves on the Board of Directors of Jackson Hinds Comprehensive Health Center, the Board of Directors of The Jackson State University National Alumni Association, he serves on the executive committee of the Governor’s Commission to Establish a National Civil Rights Museum in Mississippi. In 2009, he was a recipient of the Mississippi Medal of Service from Governor Haley Reeves Barbour.

He has served on the Board of Directors Mississippi Ballet International, the Andrew Jackson Council of the Boy Scouts of America. He served as Chairman of the National Blue Ribbon Advisory Commission to the 11th President of Jackson State University, Dr. Ronald Mason, Jr.

Dr. Peoples is a member of Omega Psi Phi Fraternity, Inc., and Sigma Pi Phi Boule Fraternity. He is a 33rd Degree Mason and a life member of the National Association for the Advancement of Colored People (NAACP). The Mississippi Conference of the NAACP conferred on him the Medgar Evers Award in 1983. He has been elected to the Jackson State University Sports Hall of Fame, The Jackson State University Hall of Fame, and the Southwestern Athletic Conference Hall of Fame. In 1993, the National Black College Hall of Fame conferred on Dr. Peoples, the National Black College Hall of Fame Lifetime Achievement Award. He was also given the Distinguished Alumni award by the National Association for Equal Opportunity (NAFEO) in 1993.

Dr. Peoples is the author of two books; To Survive and Thrive, published by Town Square Books, Inc. 1995; and How We Got Over published by John A. Peoples, Jr., Ph.D., 2008.   Dr. Peoples is married to the former Mary E. Galloway. They are the parents of two adult children, Dr. Kathleen Peoples, Ph.D., a United States Department Embassy Administrator, and Mark A. Peoples, Esq., Attorney, City of New Orleans.