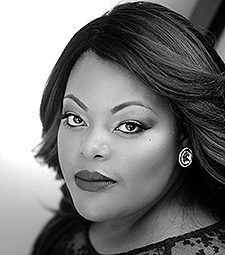 Gedeane Graham ('13 BM) is a native of Bay Springs, MS.  She recently received her Masters at Michigan State University as a Clare S. Mackey scholar.  Currently, she is completing a Performance Diploma at Indiana University's Jacobs School of Music under the tutelage of Jane Dutton.

Her accomplishments include; studying abroad in Todi, Italy, Beijing, China, and alto soloist in Handel’s Messiah with Michigan Steinar Chorale.  Ms. Graham is a past festival artist at Utah Festival of Opera and Musical Theatre in Logan, Utah.  She covered and performed roles of Strawberry Woman, Maria, Annie from Porgy and Bess, featured Midinettes from Tabarro, Mistress of Novices and Lay Sister II from Suor Angelica.

This spring, Gedeane sang the lead role of Auntie in the Indiana University Opera Theatre’s production of Britten’s Peter Grimes.  After the success of her first major role, later this spring she will sing the role of La Principessa in Suor Angelica at Indiana University. Graham is excited to move to New York this summer to cover the roles of Zita in Gianni Schicchi and La Principessa in Suor Angelica at the Martina Arroyo Prelude to Performance Summer Program.