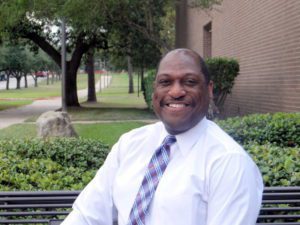 Dr. John L. Cornelius ('88 BM) is an Associate Professor of Music at Prairie View A&M University.  A member of ASCAP, Cornelius’ works are garnering increasingly frequent performance throughout the United States.  His output includes a number of chamber works, orchestral works, and song cycles.  Having been the music director/arranger/composer for a number of theaters including the Great Caruso, the Ensemble Theater, Adventure Theater in Glen Echo Park, Main Street Theatre and Theater Under the Stars’ Humphries School, he has also written, along with his collaborator, Michael J. Bobbitt, several works for the lyric theater including, Mirandy and Brother Wind, Say It Ain’t So!, The Yellow Rose of Texas and his latest, an adaptation of the Negro Baseball League classic, Bingo Long and his Traveling All-Stars and Motor Kings.  He was featured at a number of Prelude Festivals at the Kennedy Center and has received a commission from the Smithsonian Institute, Going the Distance, a children’s musical about the lives and careers of Wilma Rudolph and Jesse Owens.  Of his chamber works, Charles Ward in the Houston Chronicle wrote, “The highlight…was a set of three spirituals arranged for tenor and string orchestra by composer John Cornelius. In O Fix Me, the juxtaposition of an elegant, long melody floating over a sharp, jazzy string riff was electric.” His most recent works include Chansons Creoles, a song cycle whose text is by gens de colour of 19th-century Louisiana and Sonata of Attitudes for 2 Horns and Piano.  Dr. Cornelius is a native of Jackson, MS and received his DMA in Composition from Rice University.