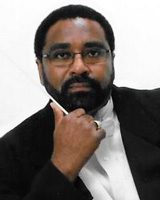 Professor Jerry A. Bracey (’82 MME)  continues to impress audiences with his interpretation of the standard orchestra and band repertoire, his exceptional affinity for 20th Century music and his command of a broad jazz repertoire.  Maestro Bracey’s extensive commitment to the organizations with which he has been affiliated has garnered him a reputation as an orchestra and band builder.  Bracey joined the faculty at Hampton University as Assistant Professor of Music and Assistant Director of Bands in the fall of 1996.  In 1998, he was appointed Director of the Jazz Ensemble and Conductor of the University Orchestra. Additionally, he is the founder of Hampton University Chamber Orchestra student- based ensemble.  Since his appointment marked the first time that one artist held both musical posts at Hampton University. He serves as Coordinator of the Hampton University Music Enrichment Program for Youth (HUM), Instrumental Area Coordinator and Coordinator for the Annual Week of Jazz, Acknowledged for Excellence as a Distinguished Educator in Who’s Who Among America’s Teachers and Sutton Who’s Who in Academia.  He is in demand as guest conductor, clinician and adjudicator.

Prior to his arrival at Hampton University, he served as Director of Bands in Tensas Parish Public Schools, Jackson Public School District and Dougherty County School System.  Under his guidance and experience, the Jazz Ensemble, Symphonic, Concert and Marching Bands received numerous awards, and superior ratings on the local, state and national level.  He also served as the Conductor of the Dougherty Country Youth Symphony Orchestra of Albany, GA.

An important aspect of Bracey’s career has been his close connection to student musicians.  He holds degrees from Jackson State University, Northeast Louisiana University, and further studies at the Nice Academic Internationale D’ete in Nice, France.  While abroad in Europe, he studied conducting with Pierre Dervaux, Ferdinand Quaptocchi; and viola with Christos Michalakakos.  During his studies at Northeast Louisiana University, he studied with Joseph Cleveland, a student of William Primrose.