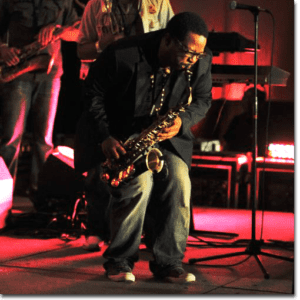 Hailing from Jackson, MS, Darryl Reeves (’01 BME) is a producer/saxophonist that effortlessly merges the lines between funk, soul & hip-hop, expressed from a platform rooted in bebop. Growing up in a musical family, Reeves attended the Northwestern Performing & Visual Arts Center in Miami. Moved by hip-hop samples originating from bebop, Reeves was led to being influenced by greats such as Charlie Parker and John Coltrane. Reeves studied music at Jackson State University. He subsequently completed his Masters of Music at the University of New Orleans, where he studied with Terence Blanchard and performed on the scene with Delfeayo Marsalis. In 2004, Reeves released the funky and playful Diary of a Bandstand, to ample acclaim. It featured Robert Glasper, Russell Gunn & Quamon Fowler and cemented Reeves’ reputation for presenting a new outlook on the sound, style and production of jazz music. Reeves has kept a steady hand in not being limited to any specific genre. Some know him just as well for his production in hip-hop. Reeves caught Ahmir “?uestlove” Thompson’s and DJ Jazzy Jeff’s attention with his ingenious jazz-funk remixes of Jay-Z’s Black Album, which was spun upon many of their dj sets. Recently in Atlanta, he has been the music director of many highly acclaimed live sets with Aishah Rashied Hyman’s Spreadlove and DJ Kemit. He has performed and recorded with notable artists including Roy Ayers, The O’Jays, Frank McComb, Angie Stone, Kirk Whalum, Jill Scott, Phonte, Toku, Janelle Monae, India Arie, Anthony David, Bilal, Original Stone City Band, Young Jeezy, Slicc Pulla, B.O.B. and T-Pain.