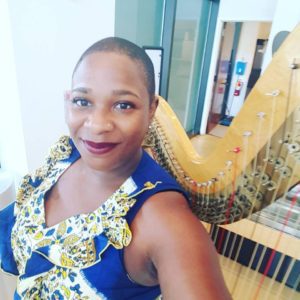 Dr. Lisa Beckley-Roberts, Associate Professor of Musicology, earned her doctorate in Ethnomusicology and Masters Degrees in Ethnomusicology and Harp Performance at Florida State University, after having received her Bachelor of Arts degree in Harp Performance from Dillard University in New Orleans, LA.  Dr. Beckley-Roberts has taught courses including Minority Music in America, American Roots Music, American Popular Music, World Music Cultures and African Music and Dance in addition to guest lecturing and presenting papers on Africana religious practices and the role of music in them, Peruvian shaman ritual chanting, and the creation of sacred space through music.  She is also an accomplished performer who has been principal harpist with the Valdosta Symphony Orchestra and the Central Florida Symphony Orchestra, has performed with orchestras throughout the Southeast, and maintains an active performance career having accompanied singers with the neo-soul and hip-hop performers of Tallahassee Nights Live.

​Dr. Beckley-Roberts currently teaches both graduate and undergraduate students courses in Music History, Studies in Historical Musicology/Ethnomusicology, Music Appreciation, Applied Harp Lessons, and has proposed and been approved to begin a World Music Cultures class.  She began the Jackson State University African Drum and Dance Ensemble shortly after arriving at JSU and held the Inaugural performance of the ensemble on November 30, 2016.  She has authored articles and film/album reviews that have appeared in the Journal for the Society of Ethnomusicology, Journal of Africana Studies, and Worlds of Music Journal and has presented at numerous professional conferences including African Studies Association Conference, Caribbean Studies Conference, African and Diasporic Religious Studies Association Conference, and Regional Society for Ethnomusicology Conference.

​Having been a Fulbright-Hayes Scholar in South Africa as well as a FLAS scholar in Nigeria, Beckley-Roberts’ research focuses on traditional African religious practices in diaspora communities of the Americas and the role of music, dance and chant in conversion processes.  However, she has also done research on exoticism in the Romantic era, the performance of gender in Western art music, and the musician’s role in contemporary resistance movements in America and Cuba.

“Music is important because it says so much about our culture and us.  It expresses who we are, who we think we are and who we want people to think we are.  If I can help students gain some insight into the meaning and purpose of people’s music, then I can help them to understand something about people’s culture and maybe about themselves.”