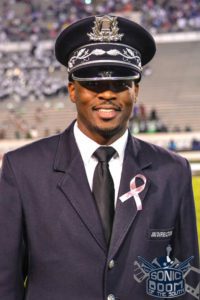 Dr. Roderick Little currently serves as Director of Bands/Assistant Professor of Music at Jackson State University.  He received his Bachelors and Masters in Music Education, and a Doctorate in Urban Higher Education Administration, all from Jackson State University. A native of Jackson, MS, he grew up in a musical family/background. During his matriculation at JSU, he participated in several ensembles including the famous “Sonic Boom of the South” where he played in the percussion section as a snare drummer, marched as part of the Jackson Five Drummajor squad, and also served as a student arranger for the Sonic Boom and student conductor of the Symphonic Band. Dr. Little studied percussion under Dr. Owen Rockwell, who is his predecessor at JSU. After completing his undergraduate studies, he returned to his high school alma mater, Lanier High School. During his tenure at Lanier, his bands received excellent and superior ratings at marching/concert festivals.  He also had students that made the Mississippi All-State Lions Band (top student honor band in MS).

In 2012, Dr. Little began as Assistant Band Director and Instructor of Music at Jackson State University. He was promoted to Associate Director of Bands in 2013 and later, Marching Band Director in 2015. While Director of the Marching Band, he has maintained the rich traditions of the Sonic Boom while adding a unique twist with the use of technology and other innovative ideas. As director, Dr. Little started several outreach programs which include, but are not limited to, the Summer High School Band Camp and A Day With the Boom; both which act as major recruitment agents for the Department of Music/band program grossing over 400-600 students collectively annually. He started the public media relations of the Sonic Boom with the implementation of the Sonic Boom Media Team and strengthened social media platforms. Most importantly, he improved the inner workings of the overall operations of the entire JSU Band(s) program.

As the drill writer for the Sonic Boom of the South having had several monumental field shows adding to the bands lustrous history of band pageantry, In the spring of 2020, the Sonic Boom of the South’s “Saints Halftime Show- Salute to the Veterans” was selected to be featured at the CBDNA-NBC Southern Division Conference which was the first appearance in the schools history.  He also arranged a massive catalog of music for the Sonic Boom of the South.  His other duties at Jackson State include co-conductor of the wind ensemble, conductor of the symphonic band, director of percussion ensemble and teaching in the percussion studio. He has acquired several new percussion instruments through NASM upgrades (an initiative started by Dr. Owen Rockwell and Dr. Darcie Bishop), which include steel pans for the percussion studio. Dr. Little also assists with observing student teachers during their clinical teaching experience(s) and has motivated several students to become successful teachers and performers. His research interest is centered around strengthening music education in urban at-risk areas.

He is married to Lynise Little whom he met at JSU in the “Sonic Boom.” They were the first to do a joint recital at Jackson State showcasing the music of both classical and contemporary jazz genres. They have two sons, Aiden and Alec Little.