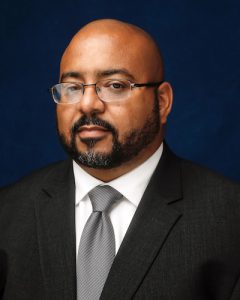 Edward O. Watson serves as the General Counsel for Jackson State University and is a member of the University’s Executive Cabinet.   He manages the efficient operation of the Division of General Counsel and serves as the University’s lead in-house attorney.  Attorney Watson provides representation and legal consultation to the University in all campus legal matters, with the primary objective of aiding the institution in reasonable avoidance and/or mitigation of legal risk. In 2019, Mississippi Business Journal named Attorney Watson as one of the top 40 attorneys in the state as part of its 2018 Leaders in the Law awards. Attorney Watson, who served as Associate General Counsel for the University from 2014-2017, graduated from Tougaloo College with a Bachelor of Arts degree in Political Science and earned his Juris Doctor degree from Mississippi College School of Law.  He is licensed to practice law in all federal and state courts in the State of Mississippi.

Prior to joining Jackson State University’s Division of General Counsel his legal practice included, but was not limited to litigation and consultation in the areas of municipal law, employment law including, Title VII matters, the Age Discrimination in Employment Act, the Americans with Disabilities Act, business formation, contracts, commercial, governmental, and general tort liability defense.  He has assisted public and private entities by providing advice regarding performance evaluation appraisal systems, development of employment policies and practices, employee handbooks and employment liability.  He has worked to provide proactive representation in his practice areas by conducting legal seminars and workshops regarding the implementation of policies, procedures, and practices to mitigate and prevent legal exposures prior to the assertion of claims.  He has been selected as a Rising Star by Super Lawyers Top Attorneys in Mississippi for the past three consecutive years.   For several years prior to joining the Division of General Counsel, Mr. Watson was a founding member of the firm Alexander & Watson, P.A.  Additionally, for several years he served as an Assistant Hinds County Attorney and the Prosecutor and Town Attorney for the Town of Terry, Mississippi.   He is a native of Terry, Mississippi. He is married to Shanell H. Watson of Meridian, Mississippi and they are the proud parents of three sons.

LaShundra Jackson-Winters serves as Associate General Counsel for Jackson State University.  Attorney Jackson-Winters graduated from Tougaloo College with a Bachelor of Arts degree in Economics and earned her Juris Doctor degree from Southern University Law Center in Baton Rouge, Louisiana.  She is licensed to practice law in all federal and state courts in the State of Mississippi.  She is also licensed to practice law in the United States Court of Appeals for the Fifth Circuit.

Prior to joining Jackson State University’s Division of General Counsel, she was a Deputy City Prosecutor in Jackson, Mississippi where she prosecuted misdemeanor crimes in Municipal Court.  After serving as a City Prosecutor, she served the City of Jackson as a Deputy City Attorney in the Civil Litigation Division.  As a civil litigator, she not only directed and participated in defending the City of Jackson, its employees, elected officials, or agents but she also assisted in drafting ordinances, resolutions, and City policies.  Attorney Jackson-Winters is a native of Jackson, Mississippi.  She is married to Sean Adam Winters and they are the proud parents of two children: Aislynn and Sean Wesley.

Tiffany, a New Orleans native and proud graduate of Jackson State University, has worked in the Division of General Counsel since 2007 and has over twenty-five years of experience as a Paralegal, Investigator and Case Manager for various Plaintiff and Defense law firms throughout the Jackson Metropolitan area, including The Cochran Firm and Forman Perry Watkins Krutz and Tardy. Currently as Director of Legal Operations for Jackson State, she manages and serves as the litigation liaison, internal case manager, legal business operations and contracts specialist, and policy archivists. She also handles FOIA requests, document production and responses to subpoenas.

Tiffany also serves as the University’s Equal Employment Opportunity Officer, conducting investigations of alleged employment discrimination based on race, color, religion, gender, age, disability, or national origin.  She assists the University to ensure compliance with its Equal Opportunity/Affirmative Action Policies and is responsible for responding to charges of alleged employment discrimination filed with the Equal Employment Opportunity Commission.  This past recipient of the “Jacksonian Professionalism Award” truly adores her “Dear Ole College Home”. She has three sons, Travis, Drew and Josh, is a proud member of Delta Sigma Theta Sorority, Incorporated and a member of St. Therese Catholic Church, Jackson, Mississippi.

Monica has over fifteen years of legal experience, beginning her legal career in corporate litigation as a Paralegal Assistant at the law office of Forman Perry Watkins Krutz and Tardy, Jackson, MS. Monica has worked as a Legal Secretary/Office Assistant at Simmons law group specializing in medical malpractice, property, corporate, and estate planning matters.  She received her degree in Business Management from Belhaven University in 2012.

Monica is married and the mother of three wonderful children. She is an active member and co-director of music at Faith for Life Christian Center.