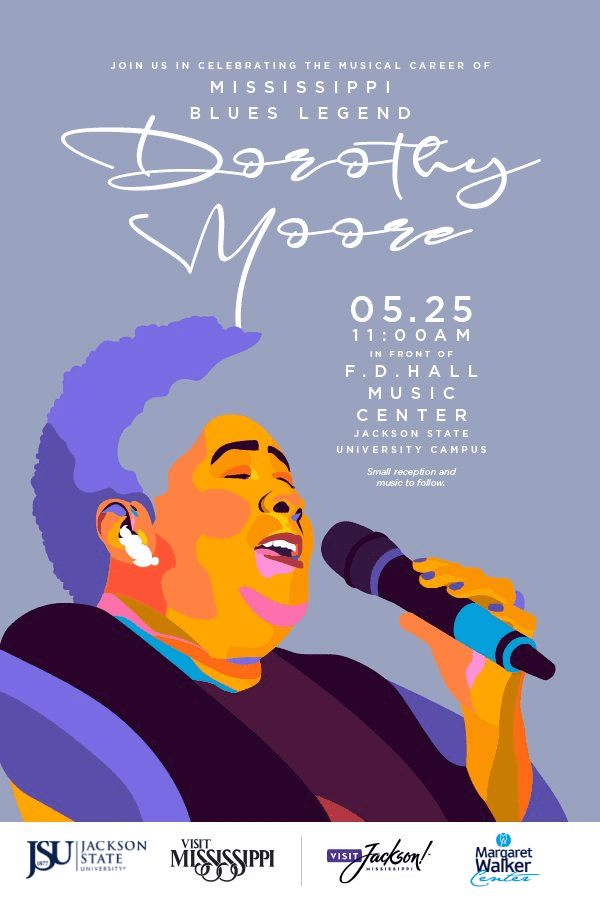 Dorothy Moore was offered a recording contract after consistently winning the Wednesday night talent contests at the Alamo Theatre while in junior high. In 1966, she recorded an album as the lead singer of the vocal group the Poppies, which she had joined while she was a student at Jackson State. Moore later sang background vocals for Malaco Records in Jackson and was soon recording there as a featured artist. In 1976, her record “Misty Blue” was a huge hit and established Malaco as a major player in the soul and blues field. Her other hits included “Funny How Time Slips Away,” “I Believe You,” and “With Pen In Hand.” She later formed her own label, Farish Street Records, and her honors include a 1996 Governor’s Award For Excellence in the Arts.
Join us as we celebrate the life and musical career of Jackson’s own Dorothy Moore with a Mississippi Blues Trail Marker unveiling ceremony at 11:00 a.m. on Wednesday, May 25, at the FD Hall Music Center on the campus of Jackson State University. A reception and musical event will follow the unveiling.
0Shares
PrevNext