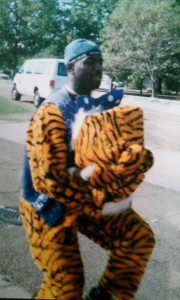 Wavee Dave's legacy began in the early 1980’s as a devoted and true blue blood JSU student that wowed fans, thrilled children and inspired diehard spirit at football and basketball games as the JSU Tiger mascot.

David “Wavee Dave” Chambers, a 1988 Jackson State University graduate stated in an interview in The Jacksonian, 1997-1998:1998-1999 edition, Building on years of excellence yearbook, “I am the ultimate Wavee Dave”.  He was an incredibly popular mascot for the University. David felt that God blessed him with divine talent that made him unique. Best known for his animated end-zone antics of riding a unicycle and plowing headfirst into the goalposts, he exuded a style of sportsmanship that endeared him to generations of Tiger fans.

Jackson State University Fans eagerly awaited the arrival of “Wavee Dave and the Baby Tigers" during home football games. The mere sighting of Wavee Dave would set the tone for cheers and chants of the fans.  Their presence on the field and halftime show would motivate the fans to “Get Ready” and kept the crowd cheering for the entire football game. 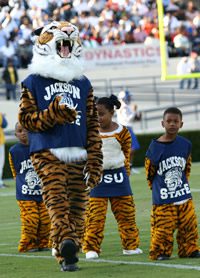 The Baby Tigers were designed to get the crowds engaged and excited.   One of the very first Baby Tigers was Thaddeus Reed under the leadership of “Wavee Dave” Chambers.  The Baby Tigers have been performing and doing community service since their conception in 1990’s.  Mr. Chambers decided to train young people’s minds to perform in the classrooms as well as on the field.  Thus, his dream began.

In 1995, the Baby Tigers were officially born with three dancers; which later expanded to twenty-one members, who performed in rotation. Eight members performed during each game. In the early 2000’s, female Baby Tigers were added to the group. Not only were The Baby Tigers known to be good dancers, but these babies were also required to maintain no less than a B grade point average while maintaining a  positive attitude. The Baby Tigers did what was required of them to perform during the games weekly, simply because they hated missing out on the joy of creating momentum at the games. These young men and women later went on to become students and some even student mascots at Jackson State University.

Wavee Dave the mascot donned the tiger suit for over 20 years until his health began to fail. In his last years, despite serious health challenges, he never failed to bring smiles to the faces of thousands of JSU fans. The beloved tiger mascot died on December 21, 2006, following complications from a kidney disease. 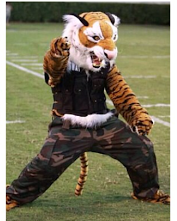 After David’s passing, his wish was fulfilled to have a Baby Tiger fill his shoes. Terrell Lewis assumed the role of Wavee Dave in January 2007, during the basketball season and performed at his first football game on September 1, 2007, against the Delta State Statesmen. Jason Hardiman, also a former Baby Tiger, served as the alternate mascot during that time. ​

After graduating in 2010, Terrell Lewis passed the role of “Wavee Dave” to former Baby Tiger Anthony "AJ" Baker in 2010 to present. Corey Shaw, another former Baby Tiger currently serves as the alternate mascot.

Whether they were former Baby Tigers or brothers of Kappa Alpha Psi Fraternity, Inc., of which David “Wavee Dave” Chambers was a member; the role of “Wavee Dave” has been passed down to other Jackson State University Students that continue to follow in the trailblazing footsteps of David Chambers.

Wavee's look has changed throughout the years. Some of his most memorable outfits include his sparkling blue vest with a blue and white polka dot bow tie, the black and white tuxedos, and the SWAT vest with army fatigue to name a few. Wavee Dave makes appearances at campus events and football and basketball games. 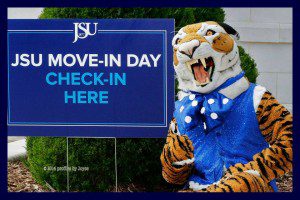