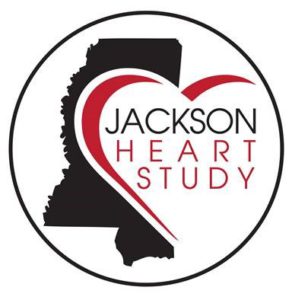 About the Jackson Heart Study

Since there is a greater prevalence of cardiovascular disease among African Americans, the purpose of the Jackson Heart Study (JHS) is to explore the reasons for this disparity and to uncover new approaches to reduce it.  The JHS is a large, community-based, observational study whose 5301 participants were recruited from among the non-institutionalized African-American adults from urban and rural areas of the three counties (Hinds, Madison, and Rankin) that make up the Jackson, MS, metropolitan statistical area (MSA). Jackson is the capital of Mississippi, the state with the largest percentage (36.3%) of African Americans in the United States.

The JHS design included participants from the Jackson ARIC study who had originally been recruited through random selection from a drivers’ license registry. Approximately six months before the JHS was to begin, an amendment to the federal Driver’s Privacy Protection Act was passed that changed the level of consent for public release of personal information from driver’s license lists from an “opt-out” to an “opt-in” basis. The Mississippi Highway Patrol was no longer able to release a complete listing of all persons with driver’s licenses or state identification cards, which prevented its use in the JHS. New JHS participants were chosen randomly from the Accudata America commercial listing, which provides householder name, address, zip code, phone number (if available), age group in decades, and family components. The Accudata® list was deemed to provide the most complete count of households for individuals aged 55 years and older in the Jackson MSA. A structured volunteer sample was also included in which demographic cells for recruitment were designed to mirror the eligible population. Enrollment was opened to volunteers who met census-derived age, sex, and socioeconomic status (SES) eligibility criteria for the Jackson MSA.

In addition, a family component was included in the JHS. The sampling frame for the family study was a participant in any one of the ARlC, random, or volunteer samples whose family size met eligibility requirements. Eligibility included having at least two full siblings and four first degree relatives (parents, siblings, children over the age of 21) who lived in the Jackson MSA and who were willing to participate in the study. No upper age limit was placed on the family sample. Known contact information was obtained during the baseline clinic examination from the index family member with a verbal pedigree format to identify the name(s), age(s), address (es), and telephone number(s).

Recruitment was limited to persons 35-84 years old except in the family cohort, where those 21 years old and above were eligible. Only persons who otherwise met study criteria but were deemed to be physically or mentally incompetent by trained recruiters were excluded from study eligibility.1

More information about the Jackson Heart Study can be found at https://www.jacksonheartstudy.org